Vitamin K is a fat-soluble vitamin. The main source of vitamin K1 (phylloquinone) in food is mainly green vegetables. Vitamin K2 (menaquinone) has mainly animal sources and reaches particularly high concentrations in fermented foods; it can also be formed by certain bacteria in the intestine. Vitamin K contributes to normal blood clotting and the maintenance of normal bones. 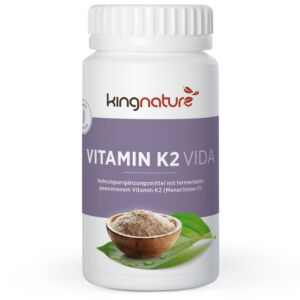 Biofermentatively produced Vitamin K2 in the form MK7 all-trans. Contributes to the preservation of normal…

What is vitamin K2?

Our body needs vitamins, but with a few exceptions, it cannot produce them itself. Therefore, we have to supply them with our daily food. There are two groups of vitamins. There are the water-soluble vitamins, which the body cannot store. It makes no sense to stockpile these vitamins. The body simply excretes them again when it no longer needs them. It is different with fat-soluble vitamins. The body can store them and it is well worth taking them in advance. Then they are available to the body when needed.

Various vitamins are crucial for supporting different processes in the body. For bone formation, it is the K vitamins with the two important subgroups K1 and K2.

Vitamin K2 belongs to the fat-soluble, i.e. lipophilic vitamins. It is not a single substance, but a chain of several compounds, the so-called 2-methyl-1,4-naphthoquinone derivatives. They are formed by bacteria.

Why does the body need vitamin K2?

Our body needs vitamin K2 for blood clotting. Vitamin K2 is the cofactor of an enzyme that is crucial for the activation of clotting factors. It is also involved in the further production of protein building blocks that are important for blood plasma, kidneys and bones.

So vitamin K2 is also important for bone formation. It has a positive effect on bone density and can reduce the risk of hip fractures.

A number of studies from the scientific literature have reportedly shown that vitamin K and vitamin D support bone formation.

How much vitamin K2 does the body need?

Because vitamin K2 is found in so many foods and the human requirement is rather low, an undersupply is unlikely. The German Nutrition Society has issued a recommendation on daily requirements. Men between the ages of 15 and 50 need 70 micrograms, and from the age of 51 80 micrograms. For women, the required amount is 60 and 65 micrograms in the respective age group.

However, a deficiency of vitamin K2 can occur in the case of certain diseases, such as liver damage or gastrointestinal complaints. These conditions could hinder the absorption of the vitamin.

External causes that could cause a vitamin K2 deficiency include taking antibiotics, anti-tuberculosis drugs, or drugs to inhibit blood clotting.

Because vitamin K2 is made by bacteria, it is found primarily in animal products and fermented foods. Meat is a good source of vitamin K2, as are eggs, milk and butter. Among fermented foods, it is mainly ripened cheese, sauerkraut and soybeans that contain vitamin K2.

Foods particularly high in vitamin K2 include natto, a Japanese dish made from soybeans. Beef liver and eel also had fairly high levels of vitamin K2.

What are the alternatives to foods with vitamin K2?

For those who do not like or cannot tolerate the above foods with vitamin K2, there are other options available. Vitamin K2 is also available as a dietary supplement in the form of drops or capsules. Some products are combined with vitamin D3. If you are interested in vitamin K2, order the vitamin K2 Vida.

Vitamin K gets its name from the term coagulation, which means the blood clotting it affects. In technical language it is also called menaquinone, among other things. It is approved in Japan for the prevention and cure of osteoporosis.

Your data is protectedHigh product and service standards