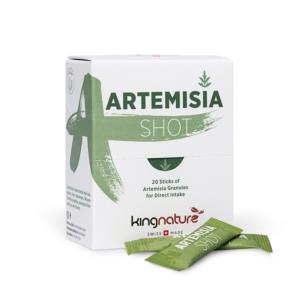 Artemisia granules in sticks for direct intakt: Practical to use! Artemisia annua from Swiss organic…

Capsules with Artemisia annua from Swiss organic cultivation. 72 capsules with 600 mg of dried…

The medicinal plant Artemisia is one of the better known medicinal plants and has numerous uses in cooking and health-related topics. Over 500 individual plants are known to date as part of the Artemisia family. However, only the annual mugwort is used in the medicinal field. Artemisia’s active ingredients include artemisinin, flavonoids beta-sitosterol, thymol, menthol, coumarin, and some essential oils – artemisinin being the best known. Artemisinin is found only in Artemisia annua, not in Artemisia vulgaris. Blood cells with a high iron content are considered particularly susceptible to attack from the central active ingredient of the Artemisia plant artemisinin.

The annual mugwort, which is used in medicine in great numbers, can quickly be confused with the common mugwort. However, the two Artemisia genera are very different in their uses and internal powers. Annual mugwort (also known as Artemisia annua) is native to Asian countries and is rarely found wild The common mugwort (Artemisia vulgaris), on the other hand, is widespread.

Artemisia in the kitchen

A very simple way to use Artemisia is to prepare a tea infusion. Such an infusion is especially popular for gastrointestinal complaints. But there are also other possibilities. For example, try our Artemisia shots in granule form!

In traditional Chinese medicine, the plant has been an integral part of healing practice for 2000 years. Among the many uses of Artemisia annua are flatulence, indigestion, insomnia, loss of appetite, anemia, abdominal pain and jaundice. Studies confirm that the active ingredient artemisinin attacks cells with a high iron content and triggers a reaction that destroys harmful cells in the body.

Herbal pillows are also popularly filled with Artemisia. Get your own refill of Artemisia for your fragrant herbal pillow from our store!

Artemisia belongs to the composite plants. Other names include shoot weed, broom weed, wild wormwood, diana weed, love weed root, and lady’s or woman’s weed. Its flowering season is in July and August. An Artemisia shrub can reach up to two meters in height. Usually, Artemisia grows up to one and a half meters in height.

Artemisia is said to have energetic healing powers. The plant is therefore a popular incense when dried. For incense, the leaves and the flower panicle are used just before flowering. The Celts also used Artemisia for incense. Symbolically, the herb stands for companions in mourning and transition processes. Therefore, it is said to have a close connection with the female spirit and a special effect when used during physical birth.